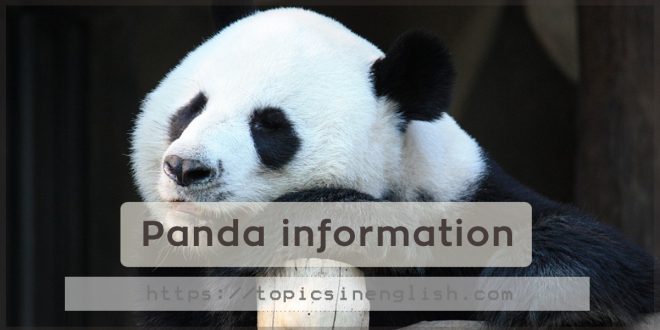 Panda information, facts about the Panda learn from it many things about the life of the panda and places of existence and the remaining numbers and also how to keep them from extinction. All of this you will find here in  Panda information.

Panda is one of the most beautiful and famous bears in the world and is an endangered animal. Here you will find all this facts about the Panda in panda information.

The panda live in south, central and southwestern China, and it is characteristic that it has a deep furthest protected from the harsh winter cold, and its body is round, and there are also black halos around its eyes .

And the male is larger than females, there is a difference of fifteen kilograms between them. Maximum length of the possible up to six feet. Panda eats bamboo as a main meal during the day.

It eats nearly 99% of its bamboo meals, as well as fish, potatoes, oranges, and many other foods. The number of pandas in the world is a thousand or less, as it is an endangered animal.

It is one of the most famous animals in the world, because it is in black and white, which is easily recognizable by looking at it, and we will learn in this article about the panda bears or what is known as the Chinese bear.

Panda bears prefer to live alone, and do not meet with their parents and peers only for a very short time and be during the period of mating.

The mating period begins at the age of four and eight years, and is in two months of the year, namely March and May, and the pregnancy period is only five months.

A female has a maximum of two panda in each pregnancy in a cave or among trees in the forest,  The weight of a small panda hundred grams, and about 15 cm long, and the young is without fur, and blind.

A small panda does not leave his mother until the age of a year and a half, some of which are inseparable from them for several years.

There are two pandas that are panda that live in China’s forests, and red pandas living in the Asian forests, especially in the Himalayas, India, and many other temperate regions, share traditional pandas in eating, isolation and living alone. It is very shy, and is endangered, but it is quite different from the traditional panda in genetic characteristics.

The state resorts to the cloning of a certain animal or animal if it is rare to exist, or the state is interested in its existence in its gardens and natural reserves for one reason or another.

So that China considers the panda bears one of the symbols of civilization and culture, It has been preserved since ancient times, and is considered one of the most expensive animals in the zoo there, so the state works to clone the endangered panda.

In this way we have provided you with  Panda information and you can read more through the following link: