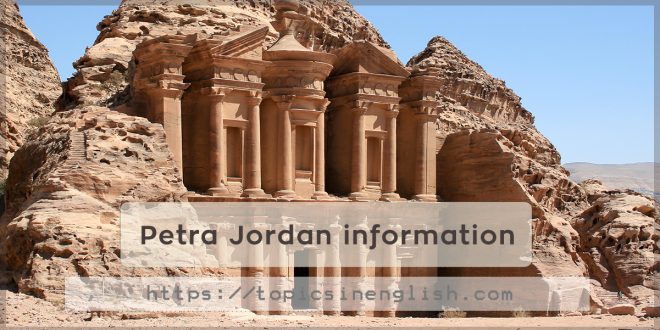 Petra Jordan information,Petra is one of the seven wonders of the world. If you are looking for information about Petra , you will find all the information you need about this wonderful country, where Petra is a great tourist destination.

The city of Petra is one of the historical and archaeological cities established in the year 312 BC. It is located on the southern side of the Hashemite Kingdom of Jordan, specifically on the slopes of Mount of the Altar. It is 225 kilometers away from the city of Amman and administratively follows the city of Ma’an.It was the capital of the ancient Nabatean kingdom, and was named after the pink city because of the colors of its pink rocks.

Al Khazna: One of the most famous and important landmarks in Petra, named after the Bedouin belief that it contains a treasure, consists of two floors each floor height of 39 meters, 25 meters wide, and consists of three rooms.

Petra Theater: It is one of the largest buildings in it. It was built in the first century AD, and it is like a half circle and can accommodate 10,000 people.

Abbey: Dating back to the first half of the first century BC, it consists of two floors.

Girls Palace: Also known as the palace of the daughter of Pharaoh, built in the first century BC.

Court: consists of several important facades such as the jar tomb.

The Great Temple: It is one of the largest buildings built in it, located to the south of the street paved.

The altar: Its origins date back to the Edomites, and it was used as a link between the days of the Crusader rule between Al-Uweira Castle and Al-Habis Castle.

It was inhabited by humans between 1200 and 539 BC. The city was annexed to the property of the Romans in 106 AD. It was hit by an earthquake in the year 746 AD and in 748 CE, which resulted in emptying of the population. During the Ottoman period, the city remained silent, and in 1812 it was rediscovered.

The economy of the city of Petra was based on copper, which was the mainstay of economic life, the pottery industry, and the trade sector. It was a station for the rest of the commercial caravans and the dry agriculture sector. Today, its economy depends on the tourism sector; it is considered one of the most important tourist sites attracting tourists. To be on the list of the Seven Wonders of the World.

The city entered the UNESCO World Heritage List in 1985. The city contains a lot of plant species such as the rift, the cone, the pubic, the lily, and the many species of animals such as donkeys, horses, goats and camels.

We have provided you with Petra Jordan information , If you would like to read more information about Petra in English you can access the following section: