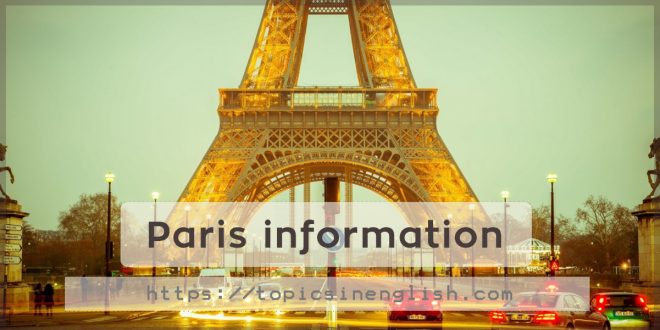 Paris is the capital of beauty, the capital of culture and the capital of fashion. You will really enjoy in this picturesque city, which is considered one of the most important and most famous cities in Europe.All this facts and more in Paris information.

French territory is spread over several continents; the main part is in Western Europe and a small part is located in North America, the Caribbean, South America, and the Western and Southern Indian Ocean.

France is one of the countries with Atlantic coasts and Mediterranean coasts; it extends from the Mediterranean Sea to  The Manch reaches the North Sea.

Stretching from the Rhine to the Atlantic Ocean, and has a hexagonal shape. Its capital is Paris, which is one of the most important and largest cities in the world.

Paris is one of the most important cities in the world, it has occupied a prestigious position among the cities of the world since ancient times, and celebrated a lot of important events at the level of France, such as the French Revolution.

Paris maintained this status to the present time,it is one of the most important economic and cultural areas.Also it is one of the safest cities that can be wander in its squares during the day or night without fear of thieves or any form of abuse.

The police are very prolific, allowing them to intervene at any time, and the city’s residents are very kind with the greatest number of visitors.

They know the importance of tourism there; so they welcome tourists and help them if they are harassed, but their French language may be an obstacle to them in some cases.

The tourist must learn some of the main French words or bring with him a dictionary to be able to understand the people of the city.

The name of Paris came from the Gauls who were known as the Parisians. They were among the first tribes to live in Paris.

The Parisian name is believed to refer to the working people or artisans. It is derived from the word Parisio, but it must be mentioned that it was called (Lothichia) between the first and fourth centuries of the Roman era, but the Emperor Ulyan reverted to the name of Paris.

The land of Paris is flat and contains several hills. It also contains the island of El San Luis and the island of Ile de la Cité, the oldest area in Paris.

The prevailing climate is generally wet and moderate, and rains fall throughout the year ,summer temperatures reach 25 degrees Celsius, but in winter temperatures are not more than zero, so the weather is very cold.

We have provided you with Paris information,and you can read more through the following section:

Powered by WordPress | Designed by TieLabs
© Copyright 2019, All Rights Reserved