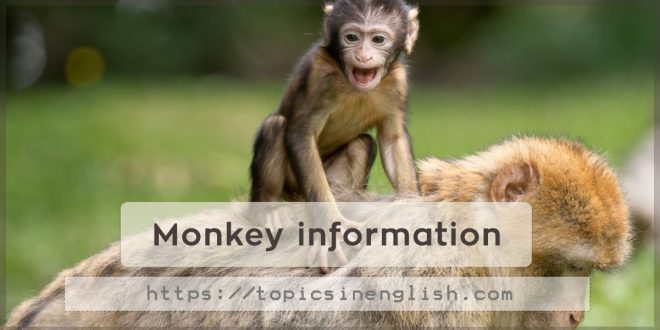 The monkey is considered the most intelligent animal, and here you will find a lot of important information about the life of the monkey and everything related to it. All this will be known here through the subject of monkey information.

Monkey is a mammal, classified as primate, one of the highest classifications in the animal world, and has more than 200 species spread around the worldز

It lives in groups in family ties run by a herd commander, who is herded  through a fierce and strong competition between the strong males of the herd.

The ancient Egyptians regarded the monkey as a holy symbol of the lower gods of the Pharaohs’ era. The statues and mummies of the monkeys were found in many Pharaonic royal tombs.

Monkeys often live in tropical forests, high-bushes, and fertile pastures, which are suitable for monkeys in terms of availability of food and housing, while other species prefer rocky and open places.

The monkeys are distributed in the world according to the type of strain they belong to,  We rarely find two species of monkeys inhabiting the same place; as a kind of control from the existing strain.

For example in South America We find The apes, the spider.  In South-East Asia, the small monkeys of Gabon are abundant. As for the Arab world, the Babylonian monkey is spread, especially in the Gulf region and Egypt.

Gorilla is one of the largest breeds of monkeys. It weighs three hundred and fifty kilograms and follows the highest species of primates. It is divided into three breeds: Orange Otane, Chimpanzees and Gibbon, the smallest.

The gorillas live in simple groups of no more than 30 individuals. They are naturally calm and calm, but if they are provoked, they turn into a very aggressive  creature. They feed on tree leaves, some fruit and spice grass, and live in Rwanda, Zaire and Cameroon.

Baboon monkey: This breed of monkeys is one of the smartest breeds, and its body is covered with fine fur, and has a strong jaw containing long cutters, which are widespread in the Arabian Gulf region, especially in Saudi Arabia, the UAE and Yemen.

The baboon monkey has large and prominent pockets to store its food in. It has a big nose that helps identify the smell of other monkeys and distinguishes the danger that threatens it tens of miles away.

Mandol monkeys and macaque species of baboon monkeys have the same physical and behavioral characteristics, but some species are smaller in size than baboons.

There are many strange behaviors in monkey communities, especially when mating; the three-year-old male monkey often has one wife, is a mother of his children, builds a separate house and takes care of the children, but

Some monkeys mate more than one female in secret . And do not issue high voices in bringing females to her; for fear of being revealed and expelled, or hit by the group.

The monkey female carries a young child at a stage ranging from four months in some breeds to eight months; she gives birth to one person breastfed for a full year, so that he can walk on foot and be able to defend himself.

We have provided you with monkey information, and you can read more through the following link: