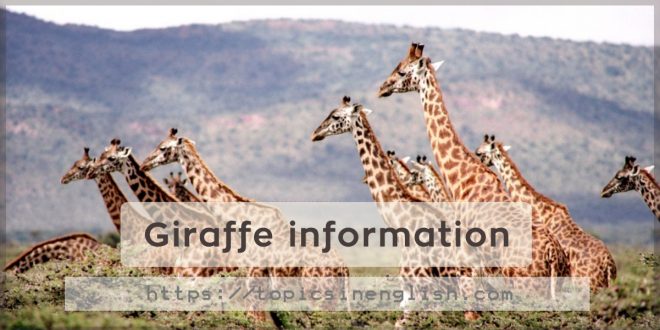 Giraffe information, and many facts we will learn  that we did not know before about Giraffe animals  that are considered the most beautiful animals on land. We will also learn about her life and where she lives. All this information and more you will find here in giraffe information.

Giraffes are wonderful creatures. There are many researches and information about these beautiful animals, how they live and every thing about it. Here we will learn a lot about the giraffe in giraffe information.

Giraffes are mammals, living in small groups of females, young and single male animals, the longest between mammals; between 4.5-5.5 meters long, walking on four legs, moving her right feet together and her left foot together when walking, her legs high and swallowing the two.

So she is able to run at a speed of more than 55 km per hour. She has a long neck with seven vertebrae, a short beard grows on her neck from head to shoulders, and in the head are short, short horns covered with hair.

The heart of the giraffe is a 25 kg weight, capable of pumping 16 liters of blood every minute. This is why the blood can reach the head. It weighs no more than 1200 kg. Its skin is yellowish and the spots are brown. Chestnut and reddish brown, has a tail end with a vest of long black hair.

Giraffes are sharp-eyed animals, And voices to communicate with each other, the voices below the sound waves can not be heard.

The home of the original giraffes is forests in sub-Saharan Africa. The giraffe usually sleeps while stands up. When lying on the ground, its neck is made upright or damaged on its body, or its neck rests on the branches of low trees. It is taken for short periods only a minute or more, and the average giraffe sleep does not exceed a minute to a few minutes a day.

Giraffes are plant animals fed on foliage, twigs and fruits, which grow on sparse trees, a ruminant that re-chews food again.

They are able to endure thirst for several weeks. The giraffes drink water, and for the giraffe to drink, it must bow its head and open its front legs or bend them until it reaches the source of water.

To get the rest of the minerals it needs, which are not available in the trees, the giraffes lick the salt into the soil and lick the bone it find in front of it.

The breeding of giraffes

The male giraffe reaches the age of puberty at the age of five years, the female at the age of 3.5 years, and when the female carries the duration of pregnancy 14 – 15 months, after which the mother puts one child, and in very rare cases may give birth to two babies, and birth is performed while mother stood up.

The baby is 1.8 meters long. After about an hour of birth, the baby can stand up and breastfeed. The mother continues to care for her baby and breastfeed him for a year. The giraffe lives up to 28 years.

The enemies of giraffes

The enemies of giraffes are essentially lions,and Tigers, leopards and crocodiles come second-rate;  These animals are able to jump on the back of the giraffe and plant their fangs, but the giraffe has the ability to defend itself against these enemies by kicking them with their legs and being so powerful that the giraffe is able to break the skull bone or the backbone of the enemy.

As for man, he became the first enemy of her. The number of giraffes decreased significantly due to overhunting. Today, they are hardly seen except in the reserves and zoos. The man hunts the giraffes , feeds on their flesh, makes the dress from their skin and makes the strings of the arches .

At the group level, only male giraffes fight together to control the group. The females do not fight, but there are strict rules that regulate the fight. No fatal blows are directed at the opponent. Strikes on the neck and abdomen are limited to the head.

We have provided you with  giraffe information , and you can read more through the following link: